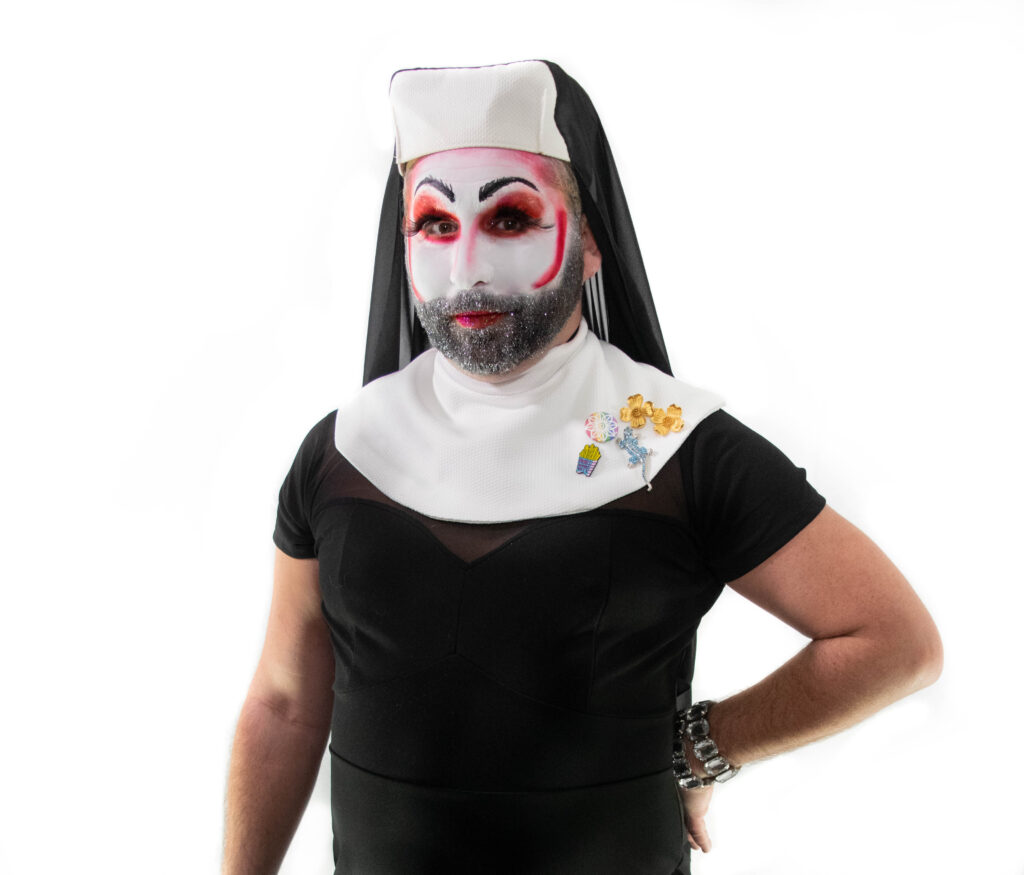 Sister Freda Nutz is the advocate and champion of all things commando. She is living her best life while servicing the community in any dark corner and promoting the shedding of the oppressive weight of clothing.  This crazy, clothing-optional Sister felt the nice, (ball)weighted tug to become a Sister after several casual encounters with Sisters in neighboring cruising parks.

Growing up as a little sexual deviant in the mountains of Alabama, resources and role models were few and far between.  She would spend a lot of time on little pig trails looking for a Daddy, Lumberjack, or Ex-Con to keep her safe and satisfied. Pickings were slim and this Sister wanted to make sure that no sexual being has to be in this empty place.  Freda’s ministry involves selfless fluffing of anyone who is feeling a little down on themselves, and always being open for you to dump your heavy loads on.

Sister Freda has not always been comfortable in her skin but has made it her life’s mission to promote body positivity and sexual education and wellbeing in her community and around the world. 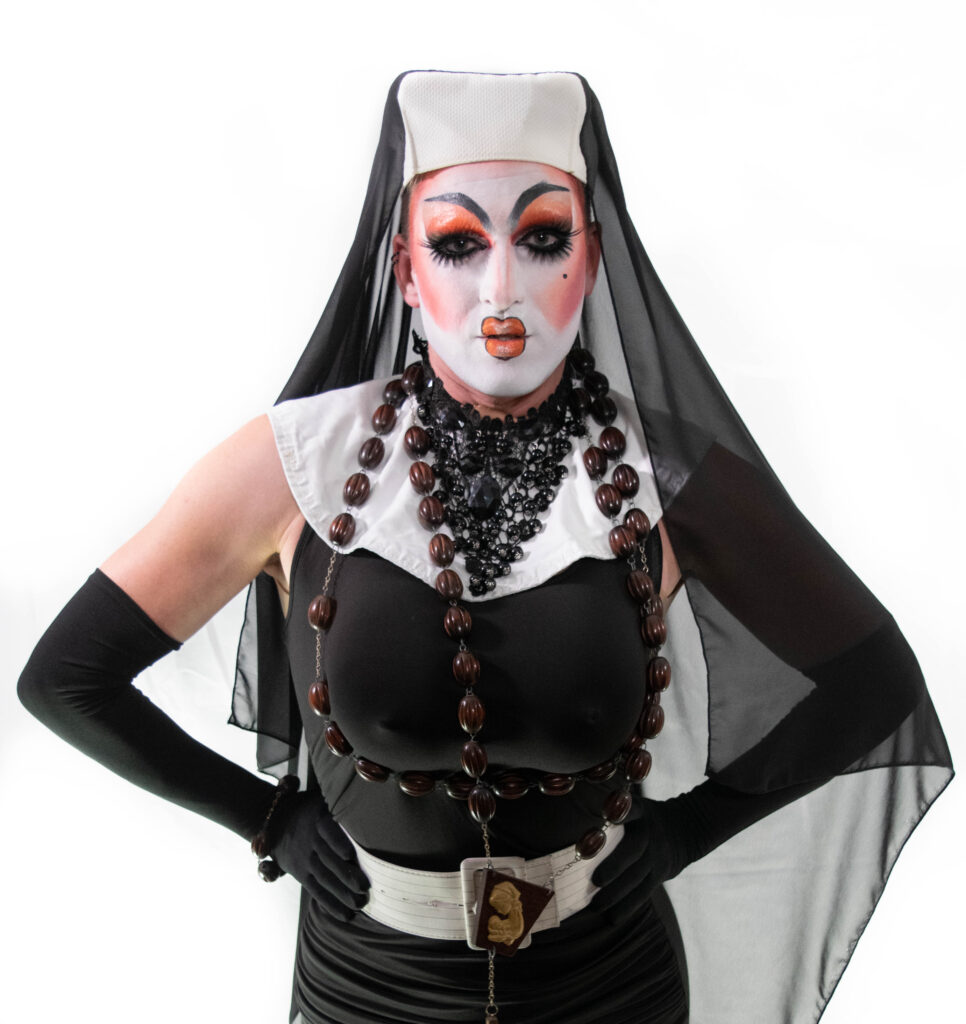 Sister Belle Zee Boob started her ministry in a secluded cloister in the south of France, where she became extremely proficient at being on her knees………praying! She had always been larger than your average provincial femme in the bust department. Her fall from grace happened one Easter Sunday when, during a service, her god given bosom bust through her vestments causing much unrest among the local monks (8 of them to be precise…… at the same time, plus 3 fellow sisters).

After fleeing the shame in her homeland Sister Belle joined the Scruffy City Sisters after she realized that her cleavage could also be used for good; absolving sin, torment, guilt, and pain through the sacred ritual of motorboating. However, don’t be fooled by her girlish figure and striking looks, as behind her demure exterior lies a very keen mind ready to take on all bigotry, hatred, and ignorance that may cross her path. Through this journey Sister Belle has become quite gifted in the sacred arts of rubber chicken voodoo, an ancient ritual she learnt in the bayou of Louisiana after passing out in a Bourbon street gutter after a fairly rigorous southern decadence evening. She will gladly take your stigmatic guilt and stuff them inside one of her blessed totems.

Sister Belle is an advocate for self-acceptance and sexual education, in particular among LGBTQ youth, and has made it her personal quest to eradicate the negative connotations and stigma of living with HIV within the gay community. 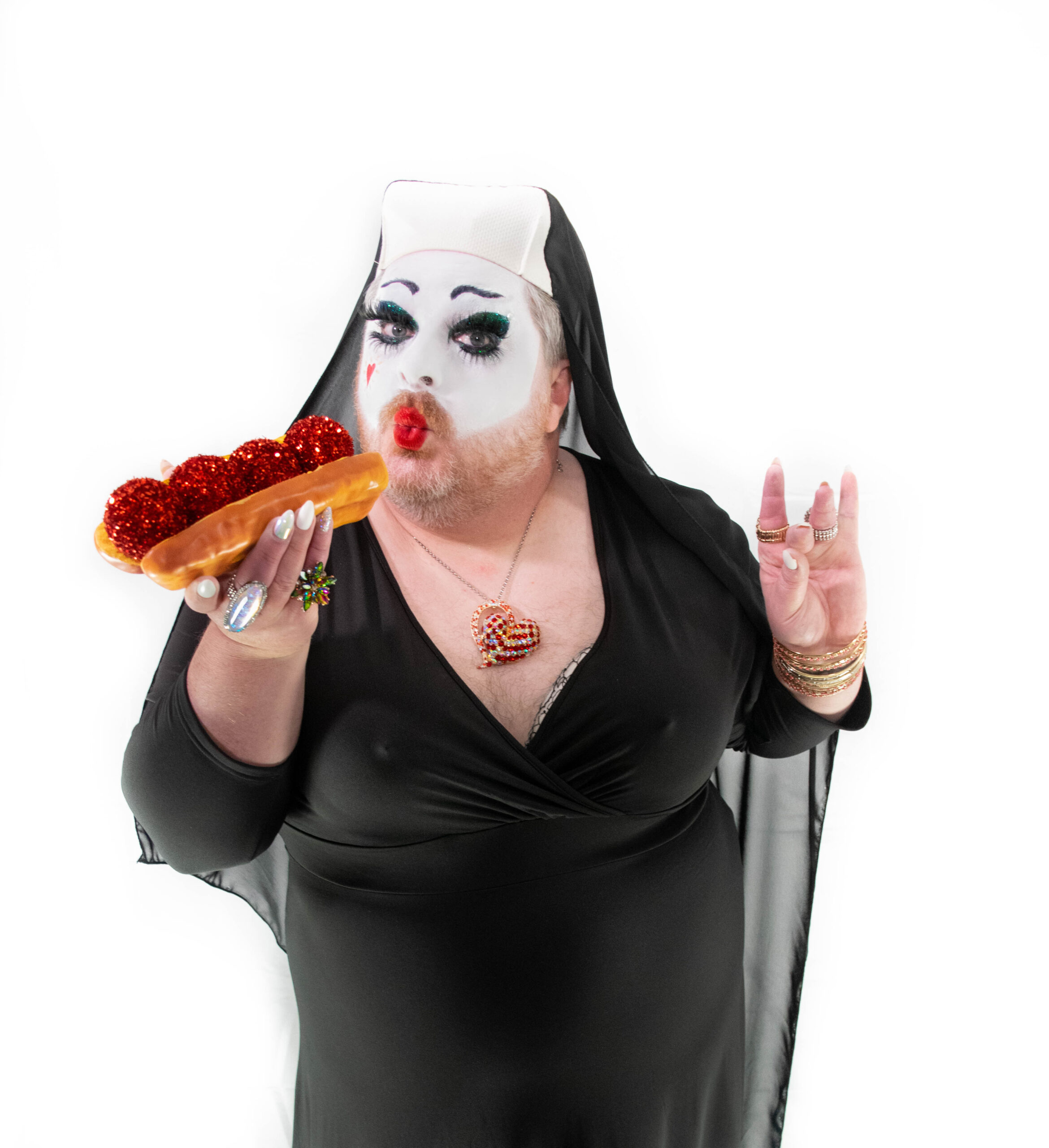 Sister Sacred Heartburn of the holy reflex was birthed from a leftover meatball sub that your sister’s cousin best friend roommate Steve left in your fridge after the annual white party supporting all the victims of bad perms. Damn it Steve don’t leave your S@#T in the fridge!

Moving on…Sister Sacred Heartburn is here to fan the flames of all your burning desires and help you with that unsightly burning sensation you got from that asshole Steve after a wild night out. Again Steve, come on!

Her mission is to ignite hope, acceptance, and love regardless of size, shape, or sins. It doesn’t matter if you identify as a meatball or a loaf of bread, each ingredient in this world has a purpose and its Sacred’s goal to bring all the ingredients together and make something magical. Remember, there is no shame in going to the fridge for that late night snack! 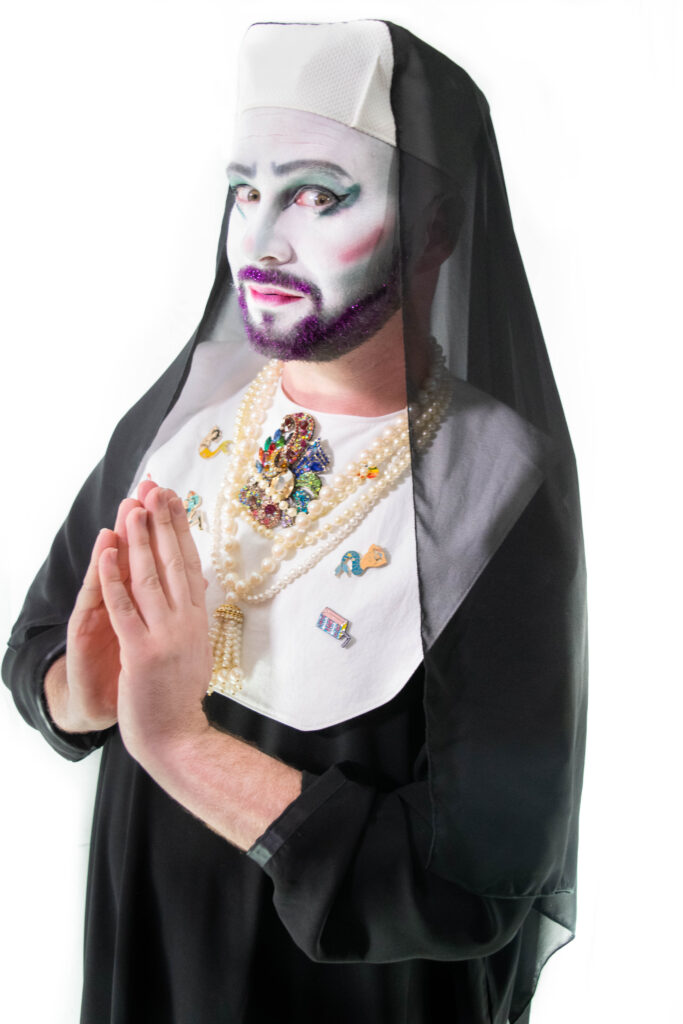 Sister Coco Vuitton VonWorth is the doyenne of all things couture (or purchased from the bargain bin). From a full evening gown and Louboutin heels, to a kicky new jock strap and jack boots, Sister Coco is committed to helping parishioners find and wear whatever makes them truly feel their fabulous selves. While sifting through the clearance racks at Bergdorf Goodman (and scoring a truly divine bouclé skirt suit, by the way), Sister Coco received her calling to the Sisterhood, and is here to proclaim that “CLOTHING HAS NO GENDER”.

Born at a trunk sale to itinerant fashion buyers for the likes of Neiman Marcus, Barneys, Harvey Nichols, and Harrods, Sister Coco knows that the lumpy blue sweater you pulled from your closet isn’t just blue, not turquoise, not lapis, but CERULEAN (and that it looks STUNNING on you). She can often be found in the cloisters measuring an inseam, hemming a booty short, or hand beading a jockstrap, and her ministry involves making sure that all those around her feel good about what they choose to wear, regardless of social stigmas or societal expectations.

Sister Coco may not always make the “correct” fashion choice, but she always makes a FABULOUS one. She has made it her life’s mission to promote gender affirmation, body positivity, and over accessorizing for all. Weather you shop at Target or Saks Fifth Avenue; Sister Coco will be with you. 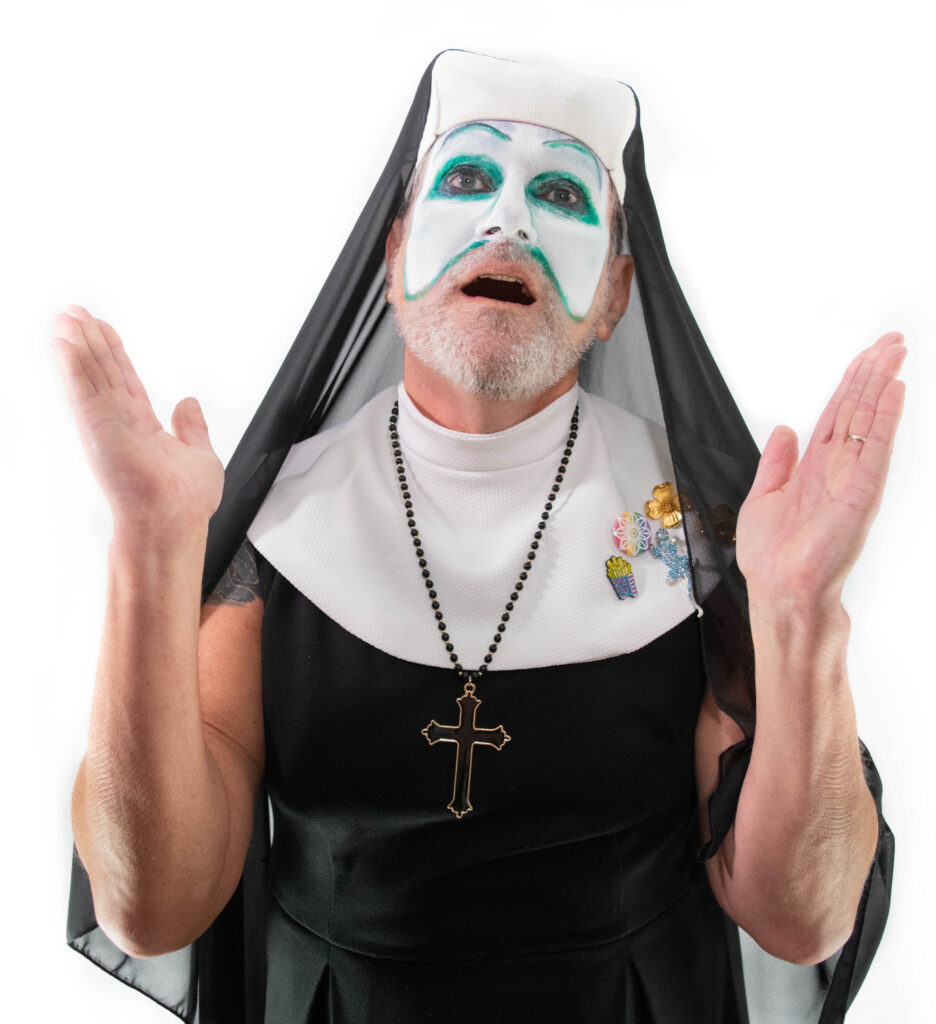 “Those who truly know her never question her name.”

Sister Anne of Noying hails from the small hamlet of Noying on the River Piddle in England. A reasonably devout Anglican, her inspiration in religious life is Almost-Saint Annae O’Noeyingge. Al.-St. Annae’s canonization failed because her healing miracles (for hangnail, dandruff, and hiccups) were deemed insufficient. Annae’s “straightforward” approach with people did not endear her to the hierarchy, and was also a tough time for ascending to sainthood—Annae of Rexia and Annae of Drogenie didn’t make it, either. Prayers for sufficient miracles for all of the Annae’s are appreciated.

The current-day Anne nonetheless draws upon Annae’s belief that “The Goode News Should Afflikt the Comfortable, and Who Better to Do Said Affliktinge?” Anne moved to the United States, stating, “Why afflict the good people of England, when Americans deserve it far more?” She lost her accent, among other things, in the process. In her heart (or somewhere in that flat bosom), she knows that most people want to do good works, but don’t know how to go about it, especially as this rarely comes up on their Facebook and Instagram feeds. Thus, she is unafraid to cajole, shame, and nag others to help the sick, the poor, the needy, and the disempowered, and help the comfortable part with their resources for a good cause, one Square swipe at a time. She also deploys her sense of humor, which at times amuses, at times confuses, but most a’times just A’Noys. In her own devotions, she turns to the Prayer of St. Francis to help her find some compassion in dealing with people and not extend just it to animals, especially cats. It should be clear that Anne needs all the help she can get, so include her and all the Annae’s in your daily thoughts and prayers. All of them could use some good miracles.

Sister Anne is “well-seasoned in life” (code words for “old as dirt”), and she has a special place in her heart for those who care for the aging, especially members of the LGBTQ community caring for parents, spouses, or siblings who are suffering with dementia in any of its forms. She herself has gone through this with one of her own biological sisters.  Especially with parents, the task of care can fall to us rather than to our straight relatives, but the challenges are often met in isolation. Her goal is to help people access resources and connect with and support one another in these caregiving situations. 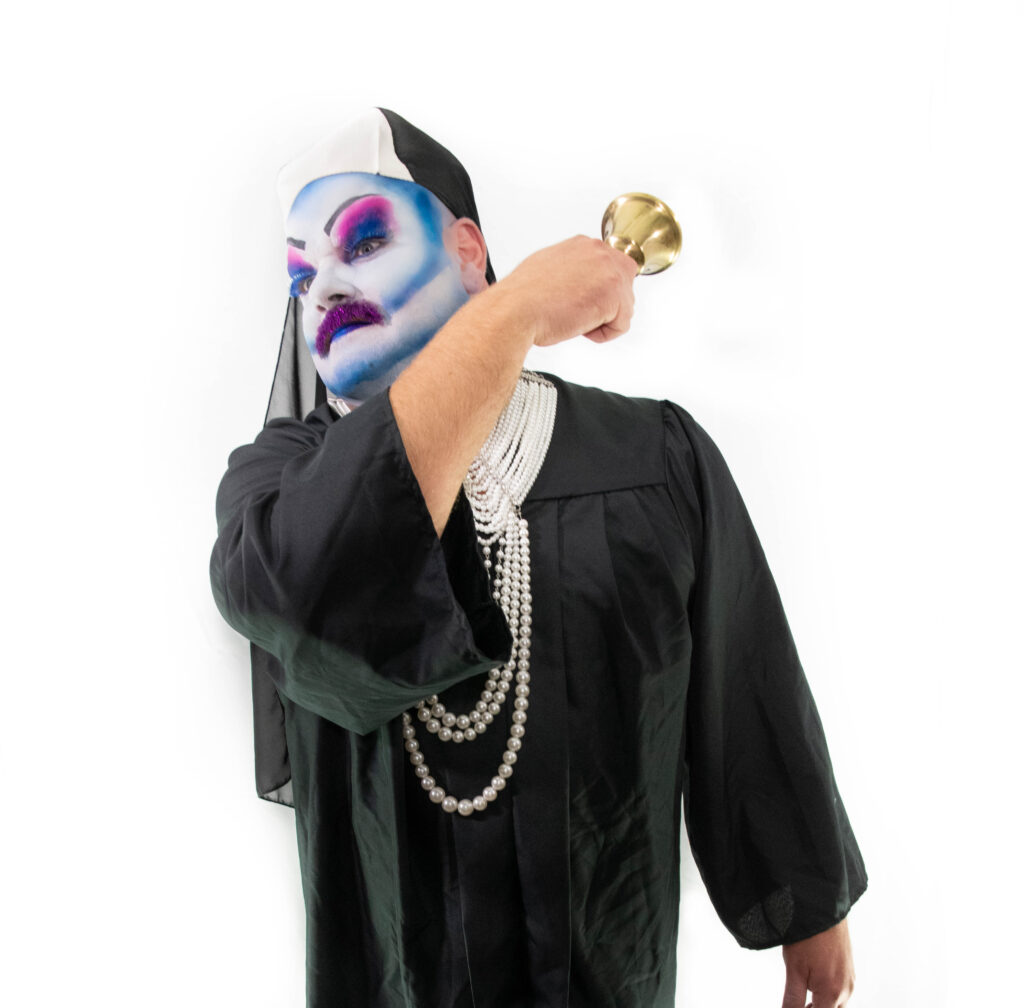 Sister Shae Moneau hails from the hills of East Tennessee, the land of moonshine, way too tight-knit families, and of course, the Blessed Dolly Parton

! Shae’s birth name was in fact “Lula Mae.” She was a Blue baby born into a house full of very Red folks. Her blueness was found out at an early age, and she was put up for adoption. A local convent took in little Lula Mae and tried valiantly to change her color, one whack of the ruler at a time, to no avail. As the poor nuns tried to correct her nonconforming behavior, they constantly yelled, “Shame!! Shame on you!! The name stuck to Lulu Mae like stuff you have to wash off your chest in the shower, and she’s been Shae Moneau ever since.

Shae left the convent long ago and set her sights on the big ol’ Scruffy City. She is now part of a house full of glitter, but blue is still her signature color! S/he is both a Sister and a Guard, which goes hand in hand with her gender fluidity. One name fits both here! Thus s/he is a defender of trans, gender fluidic and queer rights. It should be no surprise that after years of being disciplined, s/he is also a member of the kink community. Those beatings with rulers also instilled a certain fondness for corporal punishment. If you need a dominatrix or a trip down Electric Avenue, let her know. Then again, if you kink shame someone and she finds out, you’ll get a free lesson in what you don’t understand—yet!

Sister Dolly Wood, or Wood She 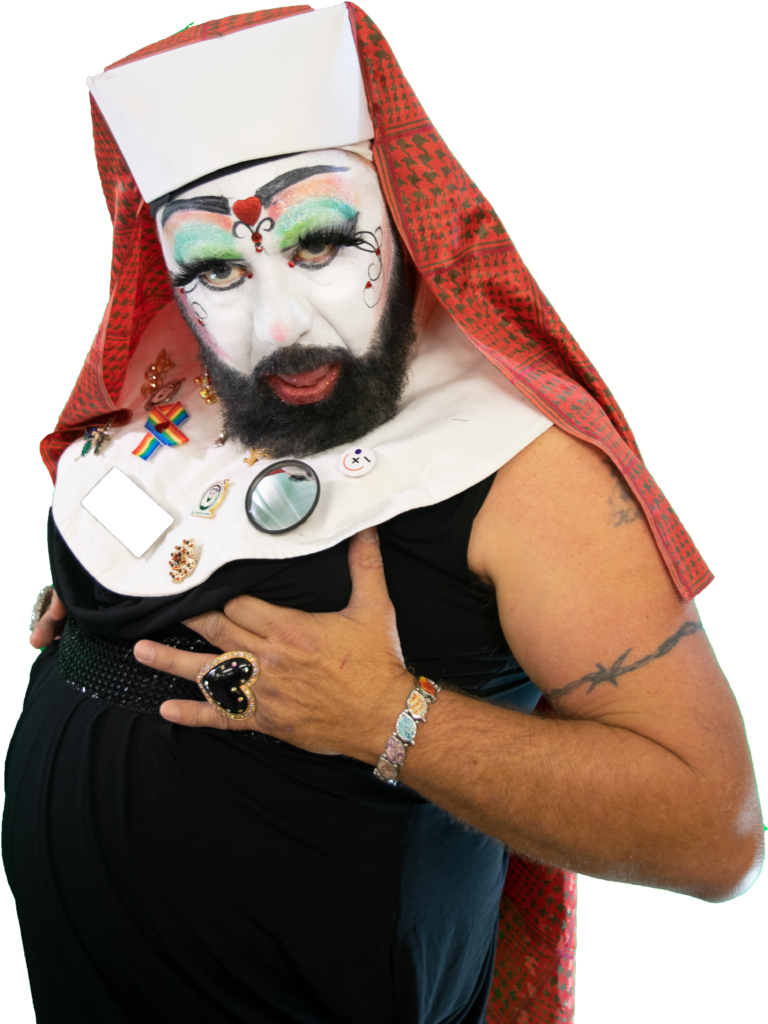 Sr Majyna Burns , after years of being in seclusion, decided she needed to go back to her roots and rediscover herself. So she packed her nunwagon in Florida and hit the roads. She had her eyes set on Zuni mountain , hoping the fairies would guide her.

After hours of driving she got sleepy and took a wrong turn. When she woke. She was deep in the forest amongst the Wood fairies of Seviere county Tennessee. They took her in , Showed her the ways of the Wood .

She re-emerged , fresh and full of life. The fairies of the wood renamed her due to her special talents. She is to now be known as Sr Dolly Wood, or Wood she . The polisher of the Sacred Wood 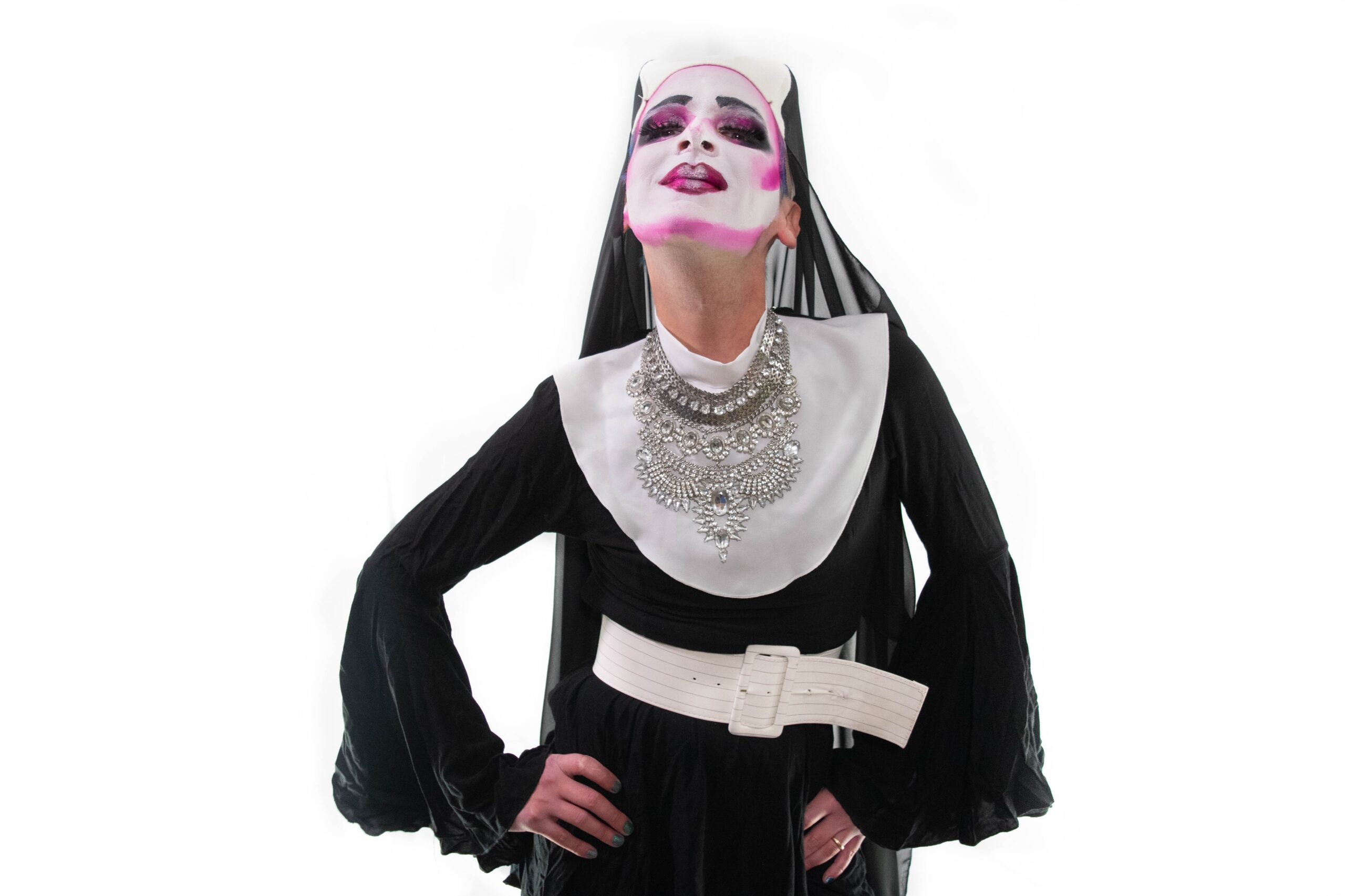 Sister Xanadu comes back to us following a “celestial awakening” on her last mission to The Netherlands. She left in 1978. She returned after being spotted naked outside of Tunica, Mississippi by a group of tourists venturing casinos.

As she is no stranger to the cold road, Sister Olivia-Newton Xanadu vows to combat intolerance and LGBT homelessness. She uses her humor and wisdom to create light and understanding, even if at times seeming from another world.