Why did I choose this: As we started this journey with hopes and dreams of becoming the clown nuns we always knew were on the inside, I asked myself, what can I do to help us make this happen?  Outside of my charisma, uniqueness, nerve, and talent what else did I have to offer?  I have always had the drive to push paper to its limits and I knew making our organization an official charity had to be my mission. I asked the group if they would allow me to take the lead on working through the red tape and they said (with perfect love and perfect trust) hell yes you can!  This project was voted on and approved by the house.

Project Overview:  This project is two parts and includes all steps in creating a nonprofit legal corporation in the State of Tennessee for the Scruffy City Sisters as well as the filing of the 501c3 paperwork to the IRS to become a federally recognized charitable organization. 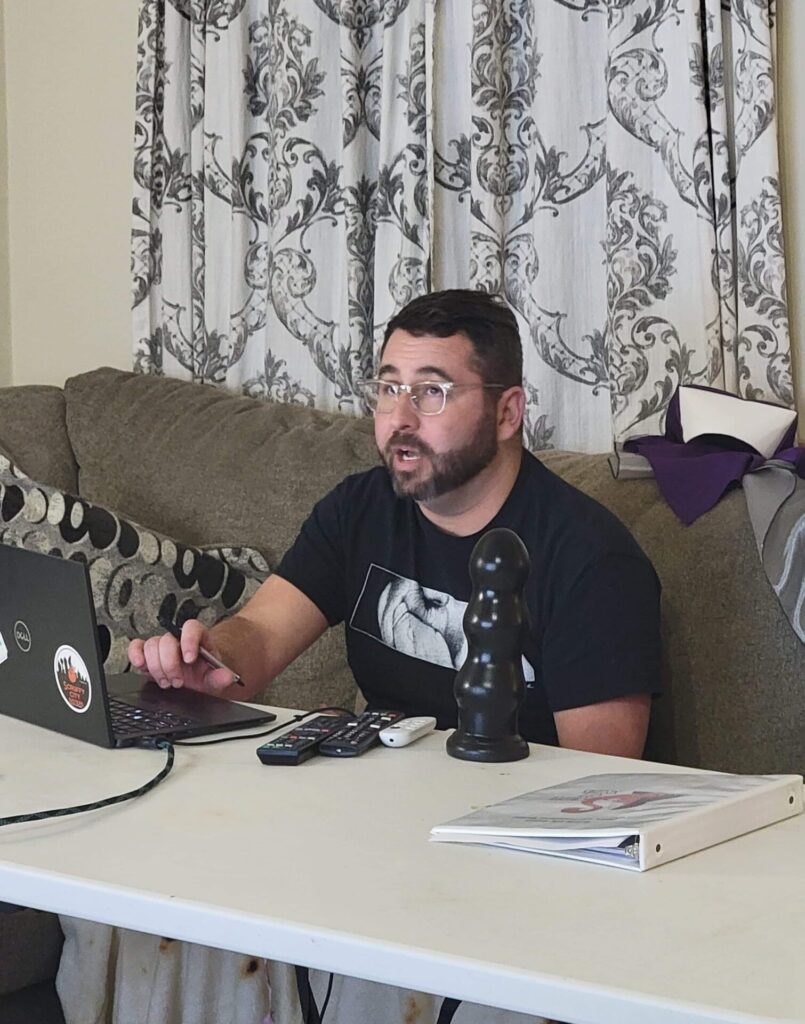 After lots of research, drawings, and the loss of all my head hair, our house cornette really started with a random hat brim at a manifestation. We all had been wearing a pretty traditional box style “nun” cornette as a placeholder when a drag queen did a reveal and plopped her floppy hat brim onto one of my Sister’s heads! Impose the grid of our blessed Sunsphere (The Golden Phallus) onto that brim, and BOOM! You’ve got a cornette unlike any other that we knew of! I made our first prototypes with the help of Sr. Freda Nutz and we debuted them at the Huntsville Exequatur in September, 2021 where it was dubbed “The Pringle”. After purchasing lots of supplies and making a few more prototypes I perfected the method of construction to share with the House!

I designed our formal habit after making the first “Pringle” and made some minor modifications after speaking with our beloved Sr. Faegala. It was adopted in February, 2022.

In the summer of 2022, I organized a House Hootenanny to teach my sisters the steps in making our house cornette and some sewing lessons, which will help them personalize their cornettes and habits. 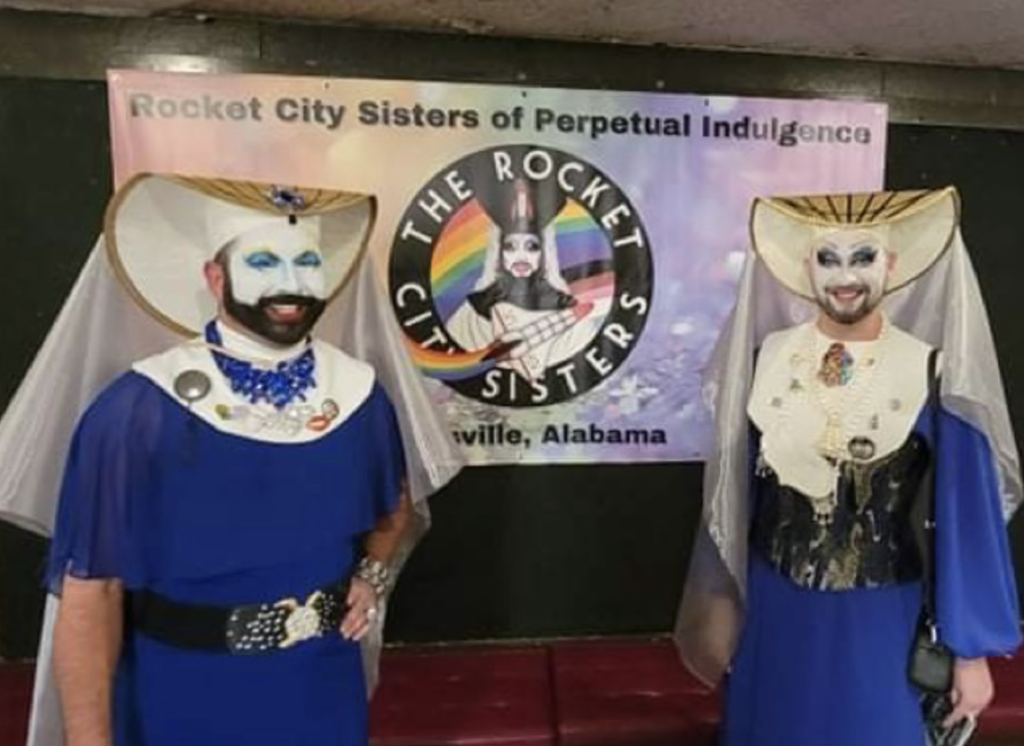 I don’t think anyone needs an introduction to what occurred in the latter months of 2019, and how in 2020 and 2021 the entire globe was brought to its knees by a global pandemic. As the Scruffy City Sisters started our journey in July 2020 COVID-19 had a major influence on both the formative years of our house and the way our house would operate for the next few years. Knoxville was lucky, in a sense, in that it took until around December 2020 before the first spike in local cases affected our community – this allowed our house to participate in a number of in person manifestations prior to that, which were all masked and outdoors. Had it not been for the upcoming election I don’t think we would have even taken the risk, as low as it was at the time.

In the September-December manifestations of 2020 we decided as a house that community care packets consisting of sanitarily packed disposable masks, disposable hand sanitizer, and information cards about the COVID-19 virus would be an important way for the Scruffy City Sisters to have an impact on the safety of our community. I took it upon myself to start producing and providing 100-150 packets to each of the in-person events that we held. In total almost 700 packs were distributed throughout this time, both at manifestations and delivered to local LGBTQIA safe spaces. With misinformation about the virus, its effects, transmission rate, and severity being rife not only locally but nationally we decided as a house to also point our community to trusted sources of information, updating our packets as soon as the CDC websites did.

As this particular project grew out of necessity rather than prior planning the scope of the project was ever evolving: 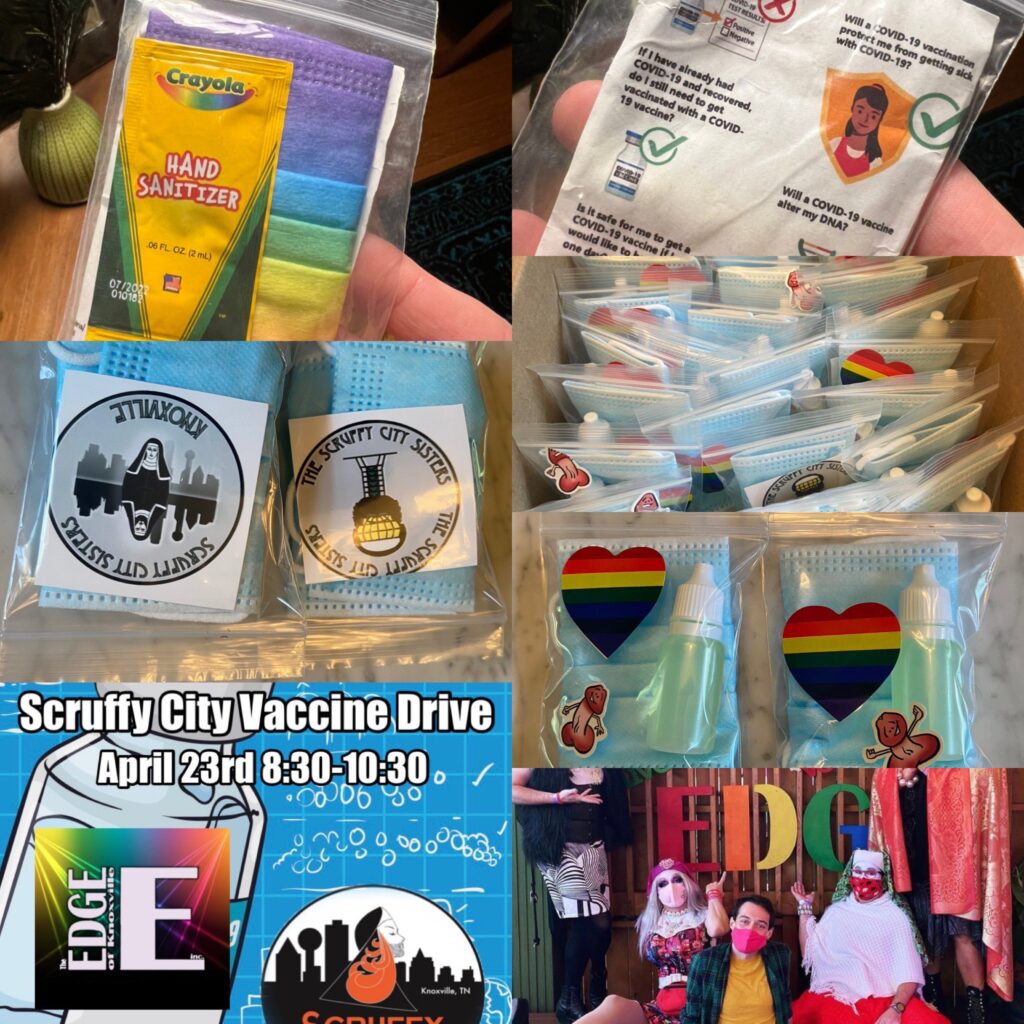 Create a video series where I make sandwiches while talking about current events, available resources for the community, and how to maintain overall wellness.

The purpose is to create short informational videos that are fun and engaging for the viewer. To make them laugh but also give them information on things like mental health resources, sexual health resources, and where to find the best buns, uh I mean bread, in the business. Also, by creating videos to post on various platforms I have the opportunity to share information to a more wide and varied audience.

My vision for this project is to release either monthly or quarterly videos. Have these videos shared over multiple platforms, Youtube, Facebook, Instagram, etc…, to reach people and share a good laugh all the while giving out important information. You never know, maybe even sign a deal on a streaming platform and make Sexy Sandwiches available for the world.

I want this to benefit the community by offering a different approach to making people aware of the resources and help they have available out in this world. As we all know, this world is getting a little more crazy and why not brighten someone’s day with a smile. My vision is this series will benefit and inspire all people who watch them. 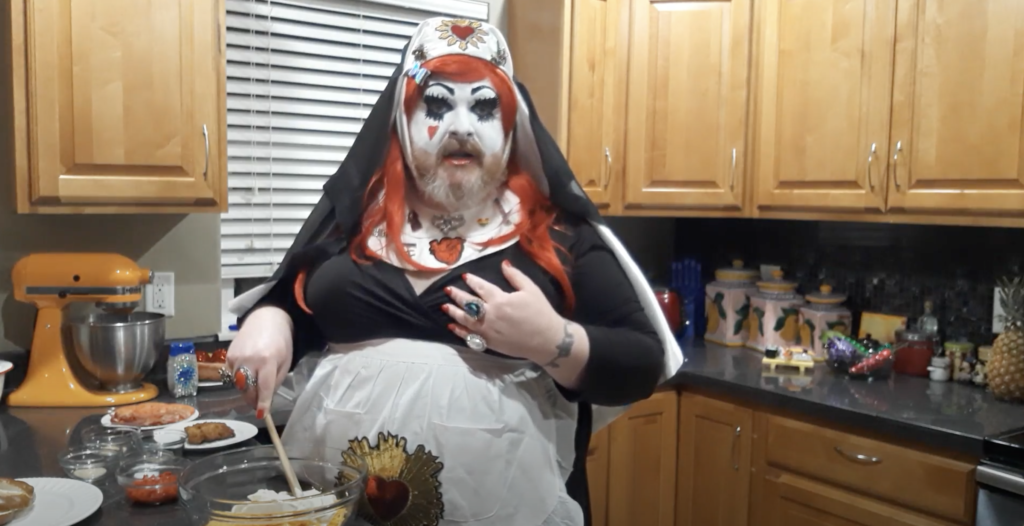 Starting in early April of 2022, The Scruffy City Sisters decided to start planning our first major charity fundraiser. The house decided on the theme “Shenuniguns on Broadway “ and brainstormed on ways to actually raise money from the event. I suggested a silent auction, and the house voted that it could be used as my Novice Project.

I immediately got to work contacting friends far and wide that were artists in a variety of mediums, massage therapists, and salon owners with the hope of procuring donations for the auction. I explained to everyone I contacted what The Scruffy City Sisters are and what we do in the community. I also explained what the three charities that we were fundraising for did to benefit the East Tennessee region. The response from my friends (and friends of friends )was truly humbling. In all we had 25 lots donated, and successfully raised nearly $1700 from the auction for our beneficiaries.

The Shenuniguns on Broadway event was a huge success, and exceeded our initial expectations. We were able to gift $850 each to Positively Living, The Women, LLC, and the Knoxville Gay Men’s Chorus. The event successfully made the Scruffy City Sisters a well known organization to the Knoxville community at large, set a shining example of the work we do, and gave us the opportunity to continue spreading our joy. 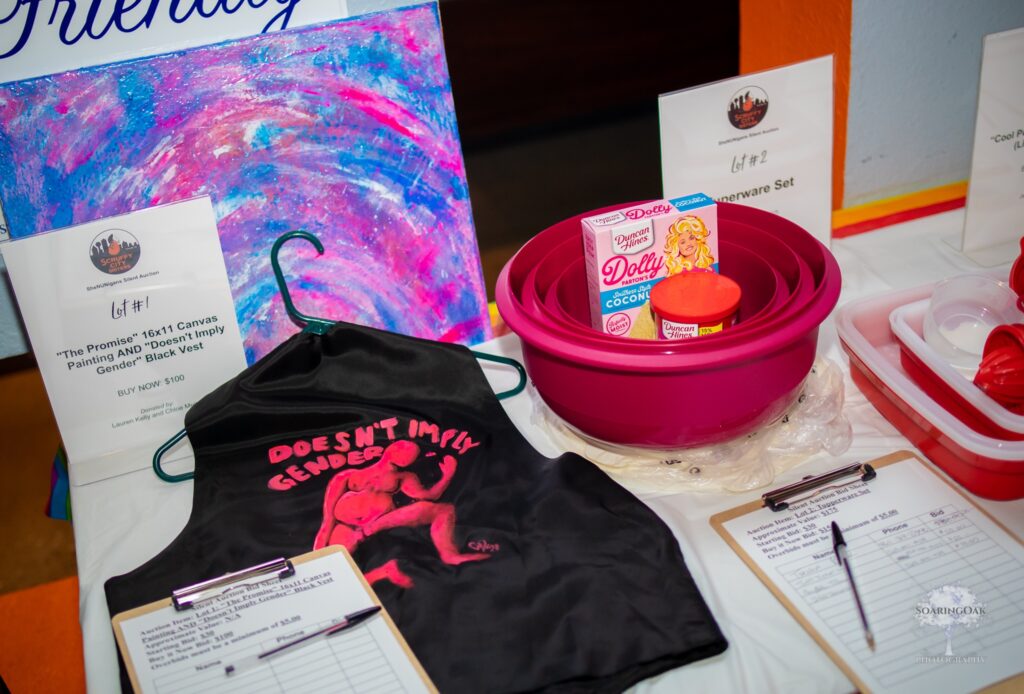 On January 10th 2022. – A McMinn County, Tennessee, School Board unanimously voted to ban a graphic novel about the Holocaust from eighth-grade classes. The book, “Maus” by Art Spiegelman, which chronicles his parents’ experiences as a Jews in 1940s and their internment at Auschwitz. The ban was due to ‘foul’ language and nudity (of cartoon mice) within the book.

In response to this Nirvana Comics, Knoxville, started a GoFundMe on Jan 28th and has raised $110k

An interview with Rich Davis of Nirvana Comics:

“The success of the fundraiser has forced us to reassess the way we’re handling this because it’s grown past being a small local initiative to now something that has the potential to impact a lot of students’ lives,”

“Right now, there’s a pretty extensive waitlist to get copies so we’re gonna fill them as fast as we can. Tennessee residents are going to get priority, so they’ll get bumped to the front of the line, especially McMinn county, after that we’ll start shipping them out all over the country.”

And that’s where the Scruffy City Sisters stepped in. We reached out to Nirvana Comics, told them who we are, what we do and that we strongly believe in their cause and would love to help in any way possible.

And so started a beautiful relationship between SCS and Nirvana comics. Then after Thousands of messages read, calls made, and emails replied to followed by thousands of “teacher education packs” made, envelopes addressed, packets put together, lists checks, and more phone calls made – over 1000 copies of Maus were sent out to students around the globe! 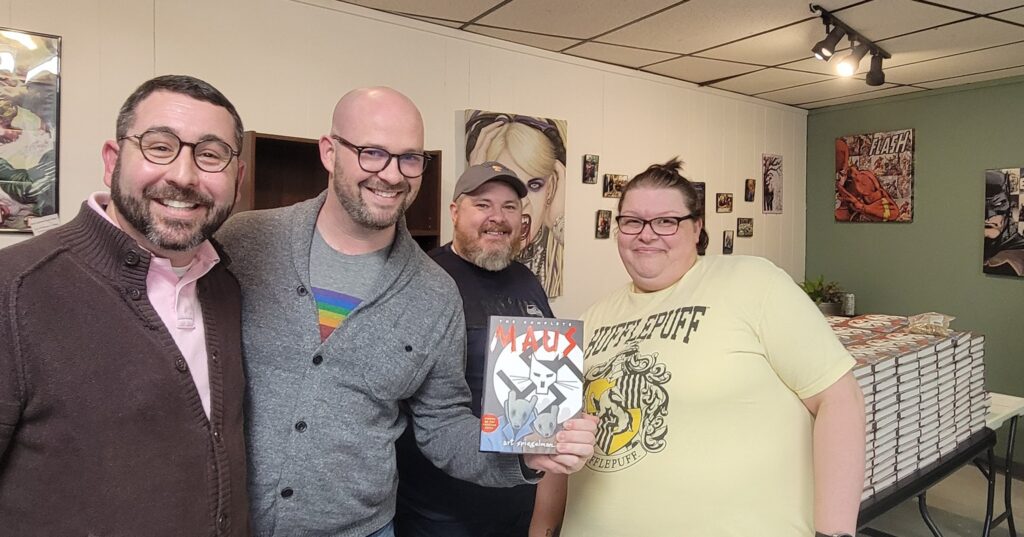